THE BOOKS closed last week on the prior two-year state budget crafted by state-level Democrats. So before turning to the new Republican state budget, let’s take a look at the results of that two-year Democratic budget.

Working together, we crafted a two-year state budget that listened to the working families, senior citizens, and small businesses of New Hampshire. The proof is in the pudding: after closing the books on our budget we had a $300 million dollar surplus, thriving business and housing markets in New Hampshire, the lowest bankruptcy filings in state history and the lowest unemployment rate (2.5%) in the country.

It wasn’t by accident. Our budget included common sense investments in job training and workforce development, affordable and workforce housing, child care, infrastructure, health care, and education. On education, we delivered the most state support ever for local K-12 education, including finally supporting full-day kindergarten like any other grade. We also reinstituted local revenue sharing with every community. Overall, we invested hundreds of millions in state revenue directly into our local communities, with dozens of communities responding by reducing their property tax rates, many more holding steady.

The naysayers of our budget said it had a structural deficit, that it relied on one-time revenues, and that it would lead to an income tax. Of course, that was all a bunch of baloney — it wasn’t true then, it wasn’t true in all those phony campaign ads you saw, and it isn’t true now. In fact, the common sense Democratic state budget led to a record surplus of $279 million this past year alone, through a pandemic. Economically, the most recent data shows the Democratic state budget helped secure New Hampshire’s footing with the lowest unemployment rate in the nation at 2.5% as well as booming housing and business markets.

There’s an old saying that if you see a turtle on top of a fence post, it didn’t get there by accident. Our budget looked to the future with resilient, fiscally prudent investments in our people and our businesses — and it paid off.

That all stands in very stark contrast to the state budget just passed by Republicans. It is a doozy. Instead of just doing a state budget, the Republicans rammed into it radical right wing policies, including a first-ever abortion ban in New Hampshire, mandated ultrasounds for women seeking any abortion, cuts in funding family planning centers and Planned Parenthood, the banning of discussions on systemic inequality at our schools and in public offices propelled by White supremacists, and the diversion of public tax dollars meant for public education to private prep schools and religious schools with little to no accountability and ripe for abuse and fraud.

It’s an agenda that will certainly hurtle the state into costly litigation and it’s an agenda driven by right-wing radicals that was, unfortunately, endorsed and signed off on by Governor Chris Sununu.

Traditionally, regardless of the political party in control, controversial items like the above would go through the normal legislative process, not simply hitch a ride on the back of a two-year state budget. But, these aren’t normal times and this isn’t your normal Republican Party — it just isn’t.

Fiscally, the Republican budget takes us back in time — decades. Over a quarter of our communities will receive an actual cut in K-12 education funding, child protection staffing is slashed putting vulnerable children in the cross hairs of abuse and neglect, private prep schools and religious schools will get your tax dollars, and additional pension costs are further downshifted from the state onto all communities.

At the same time, the tax on dividends paid to stockholders is eliminated and there’s a tax giveaway to large out-of-state corporations that should be paying their fair share to New Hampshire. The wealthiest one percent and large out-of-state corporations make out like bandits. Meanwhile, local property tax payers and small businesses right here in New Hampshire are left holding the bag, literally.

In the 2022 election, New Hampshire will vote on which political party is better at avoiding extremism in state budgeting, which is the better steward of your taxes, and which is better at propelling New Hampshire’s economy. At this point, there really isn’t much of a debate: vote Democrat at the state level in 2022.

Summer is here and it’s time to think about the Haverhill Fair!

The fair this year will be held on Wednesday, July 28th through Sunday, August 1st.

The Haverhill Fair is the only fair that is specific to Grafton County, and is a fun and effective way to spread the word about the good work of our local Democratic Party and our active, engaged regional committees. This will give us a great opportunity to meet with fair-goers, engage with voters, recruit new committee members, and have fun! Through the financial help of our regional Democratic political committees, the Grafton County Democrats have been able to reserve a booth at the Fair which will give us the opportunity to meet with all of the visitors who are finally out of their homes and just looking for their ability to speak with other humans!

In order to make this a success, we are seeking volunteers to help set up our booth, occupy it during the days of the fair, and then take down the booth at the end of the fair. We’ve created an online sign-up sheet that allows you to sign up for two hour shifts. Please sign up at THIS LINK and share this with your regional membership.

Volunteers will have to pay the $12 admission fee to get into the Fair, however once you’re inside and have completed your volunteer shift, you are free to enjoy what the fair has to offer! There is room for two volunteers for each 2 hour time slot, so sign up with a friend.

Once you volunteer for your shift(s), here are the directions to arrive at the Fair, and the image below shows where to park, pay admission and then arrive at our booth in the Presidents Commercial building. Thanks again to all of us Grafton County Dems in making this project both successful and FUN!:

Thank you for joining us at the fair! 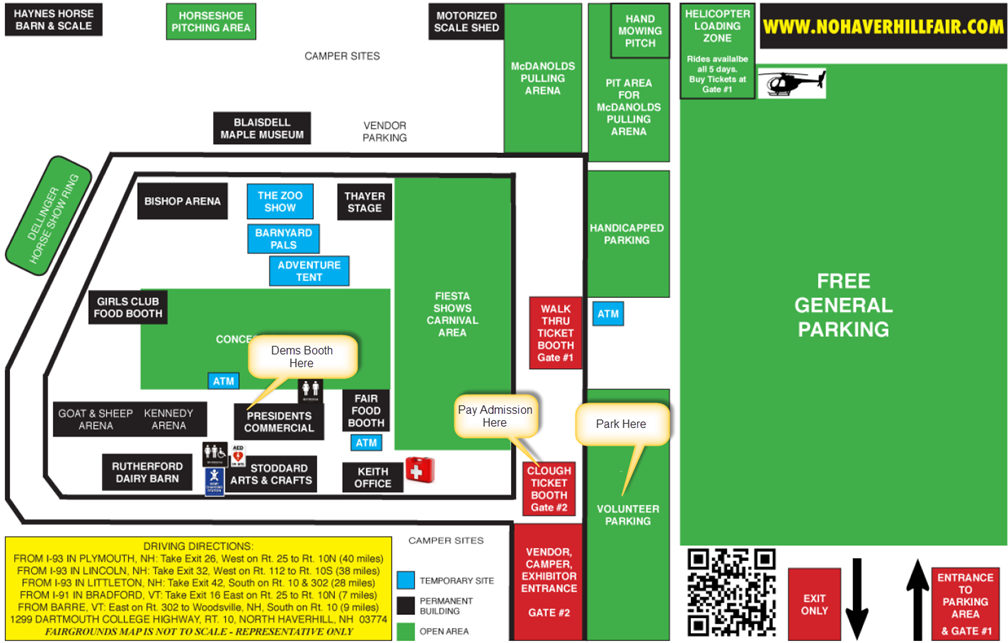